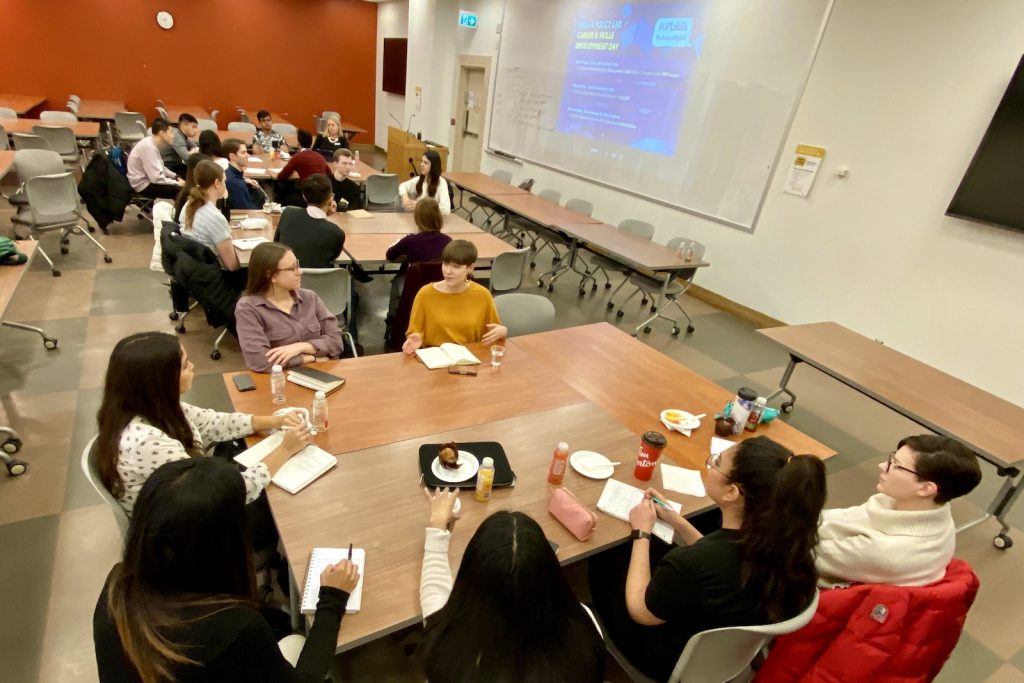 On January 10th, the Urban Policy Lab hosted its second annual Career and Skills Development Day, a jam-packed schedule of interactive panels and small-group workshops to help MPP students gain specialized skills and knowledge relevant for a career in urban policy in multiple sectors and levels of government. UPL communications coordinators Kelly Husack and Kimberley Chan sat in on several sessions — a portion of over 11 hours of concurrent programming — and shared what they learned.

“People are opinionated, but we shouldn’t avoid differences.” 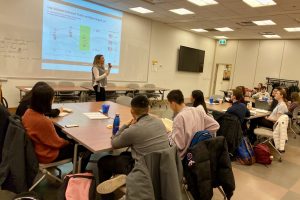 Following a lunchtime conversation about career prospects in the field urban policy with MPP alumni Rajesh Sankat, Amanda Buchnea, and Emma Loewen, MPP1 students received a meaningful lesson on  public consultation and civic engagement from Laurie Drake, Director of Research at MASS LBP. Effective public consultation is one of the cornerstones of democracy, especially in local politics. But as politics and policy-making become increasingly bureaucratic, public consultation often becomes a window-dressing exercise. There are many reasons behind this phenomenon — time, resources, and most importantly, the assumption that the public is a risk and challenge to the policies that are ready to go. However, the key to democracy is to allow and resolve contentions, to receive input that shapes better policies. Useful consultations require the right stakeholders, right expertise and right questions. Through an interactive activity, students were challenged to plan a public consultation for the City of Toronto’s new climate action plan. Using knowledge from the session, they were asked to decide the people they need to invite, as well as the goals that should be achieved, and questions that should be asked to residents.

“Operate with patience, and have a relentless urgency to get things done.” 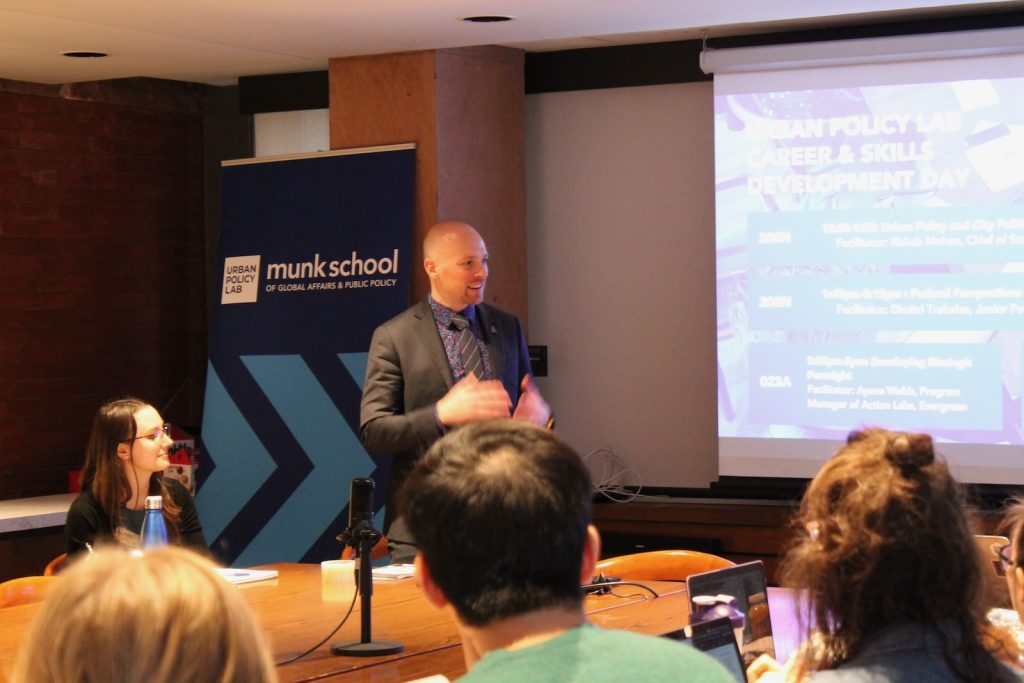 The first session for MPP2 students was led by Toronto Ward 19 City Councillor Brad Bradford and his Chief of Staff Rishab Mehen. They helped demystify the often confusing inner-workings of municipal politics and urban policy. The focus of the session was to distinguish the commonly mixed-up concepts of “politics” and “policy” when municipal politics is most often a delicate balance of the two.  Besides discussing the challenges of passing budgets and implementing new programs in his ward, Councillor Bradford also shared his experience in winning the election as a challenger. He raised important questions about Toronto’s City Council, such as, should there be a term limit for councillors? He voiced his support for making room for new leadership, and a city council that reflects the demographics of Toronto.

“Budgets are more than just the budget document.”

Following the insightful session from Councillor Bradford, MPP2 students dived right into the practicalities of municipal budget making, led by MPP alumnus Lauren Birch, Financial Planning Analyst from the City of Toronto. Birch explained the in’s and out’s of municipal budgets, including: how to read financial reports; how financial analysis differs from policy analysis; how budget approvals at the municipal level differ from provincial/federal governments; and how to report budget variances. 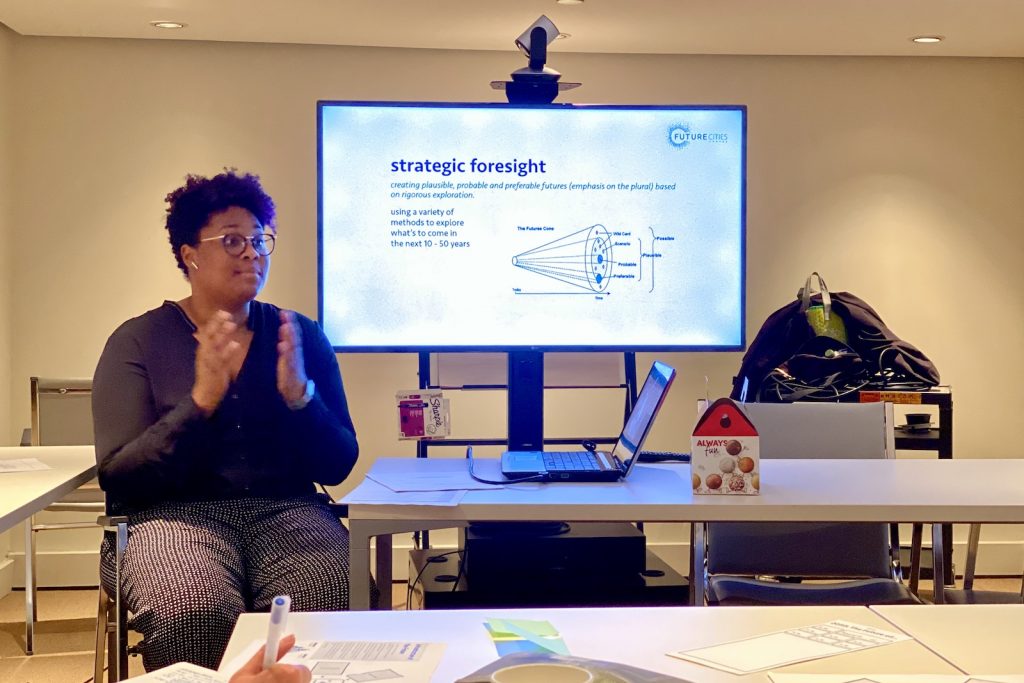 Lastly, Ayana Webb, Program Manager of Action Labs at Evergreen, facilitated an interactive workshop on the topic of strategic foresight. With big threats such as climate change, and megatrends like migration and digital governance, looming over us, how should cities and citizens prepare for tomorrow? In a nutshell, strategic foresight is “predicting the unpredictable” — developing plans and urban infrastructures to adapt to the envisioned future. Students participated in a fun brainstorming activity that involved imagining multiple futures.

Other sessions included a videoconference with senior officials at Infrastructure Canada, facilitated by MPP alumni Dimitri Treheles, Kayla Ishkanian, Brett Donnelly, and Alex Petras, as well as a workshop on urban planning led by MPP alumnus Carolyn Kim, the Ontario regional director with the Pembina Institute.